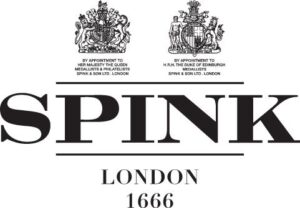 Spink Books has been supplying and publishing numismatic reference works for collectors for over 100 years, the acquisition of the Seaby imprint in 1996 further strengthening its reputation as the worldwide leader in this field.  Many Spink titles have become the definitive reference works used by collectors, dealers and auctioneers worldwide, for example its annual Coins of England catalogue, Roman Coins & Their Values and other classics by David R. Sear, British Commemorative Medals and Their Values by Christopher Eimer, and British Battles & Medals.

The World of Chinese Money

Coins of England and the United Kingdom (2022)

Coins of England and the United Kingdom (2022)

You can find out more about which cookies we are using or switch them off in settings.

This website uses cookies so that we can provide you with the best user experience possible. Cookie information is stored in your browser and performs functions such as recognising you when you return to our website and helping our team to understand which sections of the website you find most interesting and useful.

Strictly Necessary Cookie should be enabled at all times so that we can save your preferences for cookie settings.

If you disable this cookie, we will not be able to save your preferences. This means that every time you visit this website you will need to enable or disable cookies again.